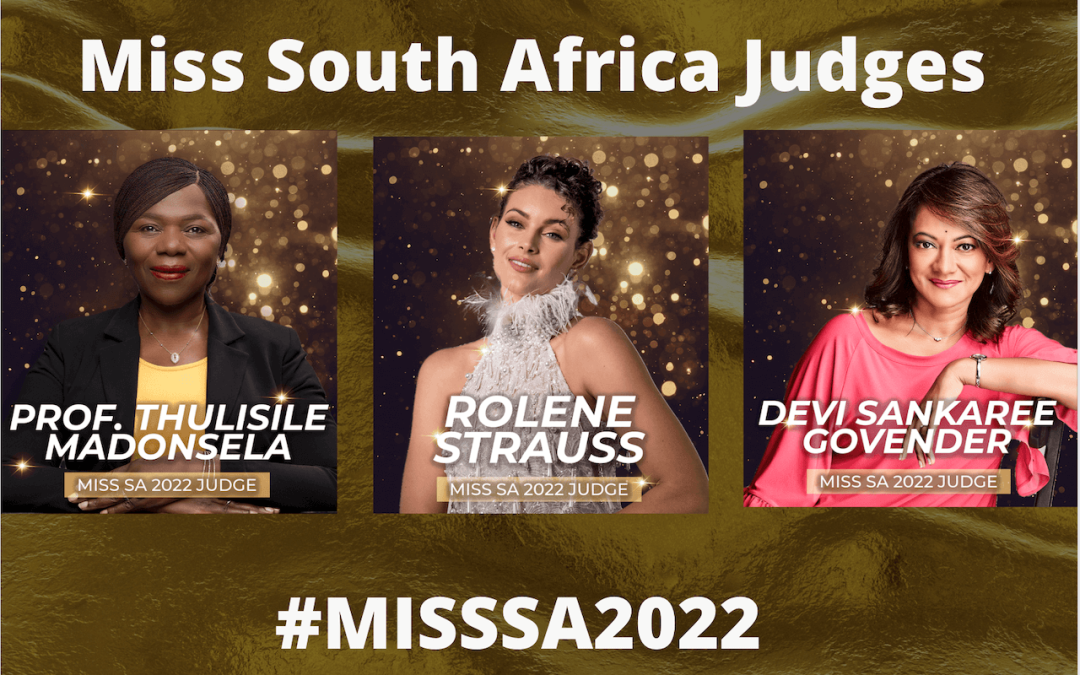 Meet the judges who answer questions about the pageant and what they will be looking for in a winner:

Thulisile “Thuli” Madonsela is a South African advocate and professor of law who has held a chair in social justice at Stellenbosch University since January 2018. She served as the Public Protector of South Africa from 2009 to 2016. In 1996, she helped draft the final constitution of South Africa promulgated by then President Nelson Mandela. 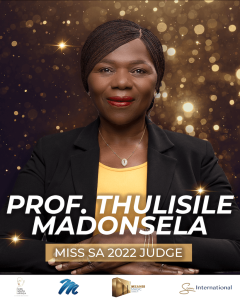 What are you looking for in a Miss South Africa?

An inspirational leader who believes in the possibility of and is playing her part to build a more just world. Miss South Africa is symbol of all the beauty that make South Africa great. She inspires hope, goodness and valour. She aspires to nourish those around her and blooms like a rose amidst the thorns. She has the ability to turn graves into gardens. I am looking for a virtuous woman who walks tall in her covenant blessings. A woman on an urgent mission. A woman who is not confined to one particular role but demonstrates the capacity to live a life filled with purpose.

Accept yourself as you are while working to do better on things that matter and if you fall treat that as school fees for lessons learned and bounce forward as quickly as you can wisened by the fall. Different seasons of life bring mixed emotions. You might find yourself feeling anxious, nervous, excited, content frazzled or even burdened but remember the challenges you are facing today don’t define you. God clearly chose you to experience this journey for a reason. Girdle yourselves with strength (spiritually, mentally, physically); there is a sacred light that serves as a lamp unto your feet. You were called for a time such as this so be strong and courageous, be loving and generous, stay confident and full of wisdom.

Harnaaz Sandhu was crowned Miss Universe last December, taking the crown back to India for the first time in 20 years. She draws her inspiration from her mother who broke generations of patriarchy to become a successful gynaecologist. Deeply conscious of the privilege her mother’s struggles have gifted her, Sandhu is a strong advocate for women’s empowerment, particularly their constitutional rights to education, careers and their freedom of choice. She is an actor with two Punjabi films slated for release this year. 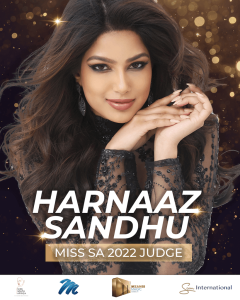 Is this your first visit to South Africa and what are you most looking forward to?

This is my very first trip to the beautiful South Africa. It has been on my bucket list since I was 14-years-old to visit and witness the beauty of this wonderful country and, most importantly, to learn more about its heritage and culture.

South Africa has been a strong contender every year at Miss Universe and it’s my true honour to meet the beautiful young women who are competing for the crown this year. I’m looking forward to learning more about their personalities and seeing them in person. I am excited to see who the new winner will be who will proudly represent her country.

My only advice to them is to be authentic! Use every minute and moment to showcase your true self, not only to the judges but to the people you are working with, those who are working on the production, your fans and the global audience who is watching! This is your time to shine and make the most out of this magical storyline you have chosen to be a part of. We all know “only one can win!” but they should emerge from this experience a  whole new person with the power to break stigmas, reach limitless heights and feel irreplaceable and unstoppable on their next journey.

Zozibini Tunzi was the third Miss South Africa to be crowned Miss Universe in 2019. Tunzi – who was one of the judges in 2020 – makes her acting debut in The Woman King which is scheduled for release later this year. The American historical epic tells the remarkable story of the Agojie, the all-female unit of warriors who protected the African Kingdom of Dahomey (in present-day Benin) in the 1800s and also stars Viola Davis and John Boyega. 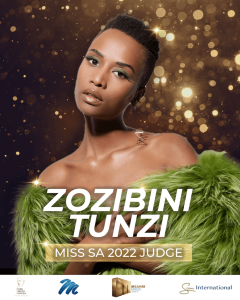 I will be looking for someone who has a unique voice and has a strong conviction in who they are and what they stand for. These are usually the people who know how to use their platform to contribute positively to humanity. They must also be sincere in their approach to the crown because this says a lot about who they will be as the reigning queen.

One of the hardest parts of the contest is the questions posed by the judges at the end. Right now, what is a question you would ask that springs to mind?

We all go through challenges. What was that one challenge in your life and did it contribute to the woman you are today? 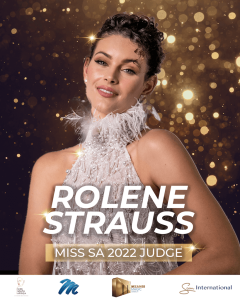 A Miss South Africa to me is a well-rounded, beautiful (of course) and balanced woman. Someone who can be vulnerable, yet strong; someone who is both real and aspirational; a woman who is content with who she is yet striving to be the best version of herself; and someone who can represent our beautiful country internationally! I have judged the Miss South Africa and Miss World pageant finales in 2018. My judging criteria mainly stays the same but I get more particular regarding certain criteria as I become older and get a more objective view of what truly is important, not only in pageantry, but in life in general.

Know your boundaries when it comes to handling criticism. Taking the right type of criticism to heart can truly help you grow and reach your full potential but others can steal your joy, and authenticity and turn you into someone you are not. You are opening yourself up to all kinds of criticism during this journey (and beyond) so decide beforehand what your boundaries are. Of course, be open to growth, but don’t let this change your authentic being.

One of the hardest parts of the contest is the questions posed by the judges at the end. Right now, what is a question you would ask that springs to mind?

As a Miss South Africa, you will be faced with criticism from various different platforms and people. Learning how to handle criticism in a healthy way will become one of your most valuable skills. How do you handle criticism?

Devi Sankaree Govender is an award-winning investigative television journalist who has spent the past 26 years in the media after starting out on radio before moving to print and television. Govender, an MBA graduate, worked for Carte Blanche for 17 years and gained a reputation for being fearless in highlighting corruption and crime. She hosts a new show titled Devi on eTV and Enca. 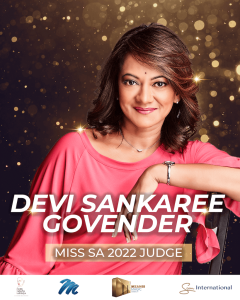 Why did you decide to join the Miss SA judging panel and what do you think you will bring to the table?

I didn’t think twice. Miss South Africa is not just a beauty pageant where young women rely on their physical beauty to earn a crown, win fantastic prizes and gain some fame for a year. Miss South Africa is a powerful leadership opportunity designed to arm young women with a wide range of skills and strengthen their voices, so that even when their reigns are over, those same voices can be heard, loud and clear. I can easily spot an act. That’s what nearly 30 years of investigative journalism has taught me. So, I’d like to think that I bring a large slice of reality to the table.

Intelligence. Frankness. Boldness. A strong drive to bring about social change. Agility and a sharp sense of humour!

Our country stands on the shoulders of women who refused to give up yet South Africa is still one of the most dangerous places to live, especially if you are a woman. Miss South Africa isn’t just an ambassador for our country but a voice for active citizenry – because change has to come. 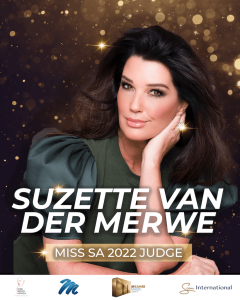 Is this your first time as a Miss South Africa final judge?

What will you bring to the panel?

As a former Miss South Africa – combined with my five-year involvement in the Miss South Africa organising committee  – I believe I am well acquainted with the selection criteria and protocols. As a mother of a 20-year-old daughter, I humbly claim an understanding of this generation of young women. They are not scared to use their voices and not prepared to simply stand on the sidelines when it comes to important social issues. They care deeply about equality, diversity, inclusivity and body positivity. To Miss South Africa Organisation’s credit, it has adopted and represented many of these values and, as such, the winner reflects what is happening in broader society.

Similar to our national sports teams and stars, Miss South Africa contributes to nation building and pride, especially when they excel internationally and hold the South African flag high. I’ll be looking for that unique spark and qualities that will not only inspire the hearts of the people of our nation, but a winner who will represent us on the world stage. The ideal candidate has presence, is authentic, articulate and has a “servant attitude”. She is confident, hardworking and ambitious with a clear vision of the goals she wants to achieve and the legacy she wants to be remembered for.

Thando Thabethe is an actress, TV personality and radio DJ . She was the presenter of the TV show Thando Bares All on channel TLC and is currently a drivetime host on 94.7. She is Nivea’s first brand ambassador in Africa and in 2019  was named one of Forbes Africa’s 30 Under 30. She was also one of the judges who chose the Top 10 this year. 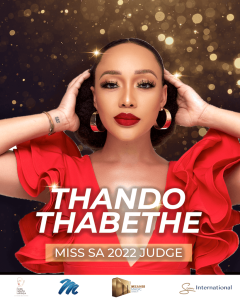 You are the only judge on the finale panel who judged from the Top 30. How do you believe the contestants have developed and grown since you first met them?

Being a part of this incredible journey with these young women has been life changing; not only for the girls but for all involved. The love and care that the Miss South Africa Organisation offers these women is simply spectacular and encourages them to be the best versions of themselves. I have seen women come in as a diamond in the rough to transform into incredible ladies who are not afraid to shine. The Miss South Africa pageant is a testament of how hard work can reap incredible results.

I will be looking for a lady with a strong head on her shoulders, one who is aware of herself and her power and is ready to represent South Africa.

Have fun! This allows you to be your most authentic self, we see when the real you shows up, be you because no one can do that better than you.